The History of Sandwich Construction and Honeycombs

Long before mankind began to create structures, buildings and machines, the sandwich concept and the honeycomb structure was developed by nature.

Many other examples can be found in the skeleton of organisms, in leafs of plants as well as in the wings of birds.

Section of an iris leaf

Section of a bird wing

Section of a human skull

Natural honeycomb of honeybees – about 50 mil. years ago

The honeybee comb is an optimal material efficient construction because it is build via two physical minimisation phenomenas:
1. hexagonal closest packed cylinders and
2. minimal surface energy.

The hexagonal comb of the honeybee has been admired and wondered about from ancient times on.

The great ancient Greeks – about 1300 BC

Daedalus, the mythical inventor and craftsman of the ancient Greeks is said to have manufactured a golden honeycomb by lost wax casting (reported by Diodorus Siculus, 90-21 BC). 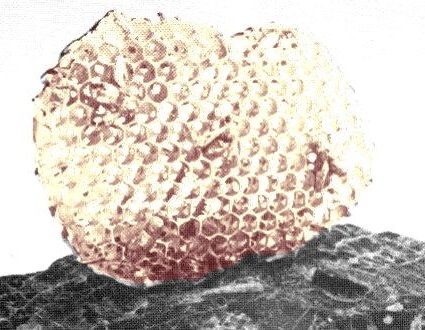 Archimedes lays the foundation of engineering and discovers besides density with the law of lever the first element in understanding the moment of inertia of sandwich constructions.

Remarkable example of the practical capabilities, experience and understanding of the Romans: The 1000 m long bridge over the Danube build by Apollodorus under the Emperor Trajan. 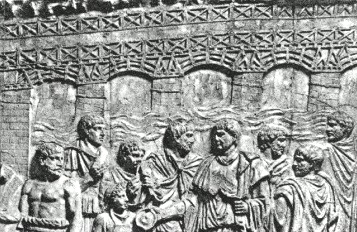 Marcus Varro reports that the geometricians (Euclid, Zenodorus) have proven that with the same amount of material the hexagon will be able to hold most honey.

Vitruvius (90-25 BC) reports in „De architectura libri decem“ about the discoveries of Archimedes and describes roman truss roof structures in detail. (Palladio drawing in the 1556 edition of Vitruvius book)

The „Authentica Habita“ gives special privileges to scholars. This starts the liberation process from the edjucation monopol of the church and leads to the foundation of many universities.

Rediscovery of the book of Vitruvius in Rome – 1415

The invention of printing with individual letters and humanism initiated a new era: The Renaissance.

Da Vinci´s discoveries of the neutral axis and the relations between span length, load and deflection in three point bending stayed unknown because his „Madrid Codices“, two previously lost notebooks, were only discovered in 1965.

“If the initially parallel lines (a and b) would contact each other on the lower side one would find that their distance on the upper side would have increased with the same amount. In the middle of the height the distance between the line (c-o) would not increase nor decrease.” (da Vinci, 1493)

Leonardo da Vinci explains that with the same loading four beams which are bonded together bend like one beam of one fourth the span length. Althought he did not show the correct effect of a width and height increase, da Vinci must have realized that a much larger defelction would result if the four beams would not be bonded together.

Palladio´s truss beam constructions indicate good understanding about how to prevent shear deformations, but for his bridge in Bassano he employed addtional supports, which carry the full load and make the bridge vulnerable against the debris of the floods.

Palladio´s wooden bridge with roof at Bassano, with non-loaded roof – not yet a sandwich construction (1567).

Galilei works on bending problems and discribes the efficiency of tubes versus solid rods.

“I want to add the theory of resistance of hollow solids. Art, and nature even more, makes use of these in thousands of operations in which robustness is increased without adding weight, as is seen in the bones of birds and in many stalks that are light and very resistant to bending and breaking.” (Galilei, 1638)

Robert Hook discovers that the natural “cellular” structure of cork is similar to a hexagonal honeybee comb.

Leupold presents first explanations for the sandwich effect in his consideration and advice about how to stiffen wood beams.

Victor Louis knew Leupold´s book „Theatrum Pontificale“ from his work for the King of Poland.

Iron sandwich beam in ceiling of the theatre Comédie-Française. 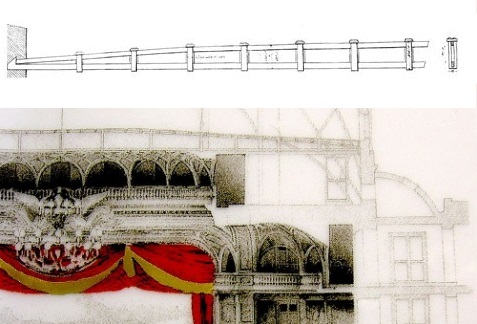 The advanced sandwich beam design of Victor Louis is reported and analysed by Rondelet and Duleau.

The stiffness increase due to the sandwich effect in a beam with spacers is analysed and first documented by Rondelet and Duleau.

First use of the relation b (h³-h1³) / 12 to calculate the deflection by Duleau.

Application of sandwiches in transportation

The first sandwich beam in transportation, a wooden beam plated with iron, reduced the weight of the locomotives of George and Robert Stephenson and was one element for their commercial success. 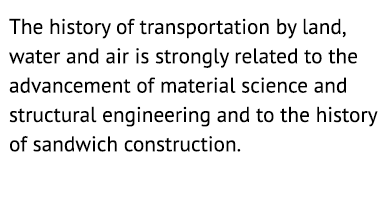 The „Planet“ locomotive of Robert Stephenson from 1830 has a sandwich beam frame made from wrought iron plates bolted together on an ash wood core (Stephenson Patent, 1833)

The term sandwich was for structural applications first used for this three layer beam construction of the locomotive frames of Stephenson. Robert Stephenson constructed also railway bridges and was the first civil engineer to become a millionaire. 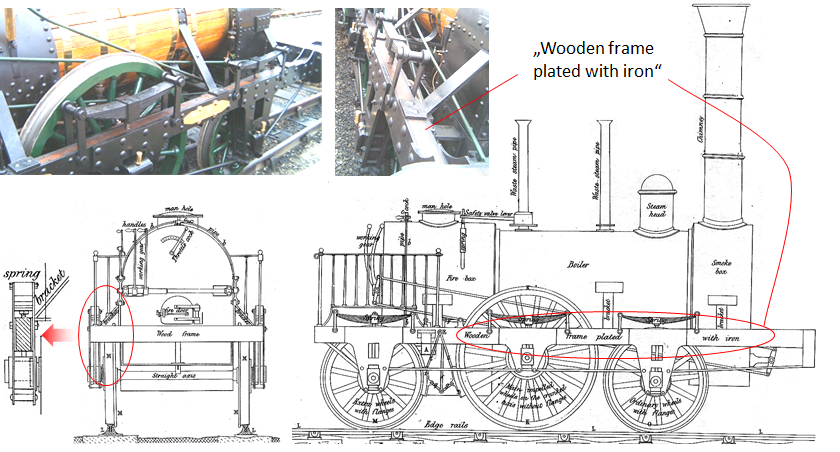 Robert Stephenson had 1845 the idea of a bridge with the train driving in a tube and consulted William Fairbairn. He made a sequence of designs and experiments to construct the tubular Britannia bridge with 149 m free span : A second order sandwich design (Fairbairn, 1849).

For theoretical verification the mathematician Hodgkinson was consulted. His stiffness calculation was finally only 20% off. He insisted on adding chains as a safety measure. However, the chains where never added. 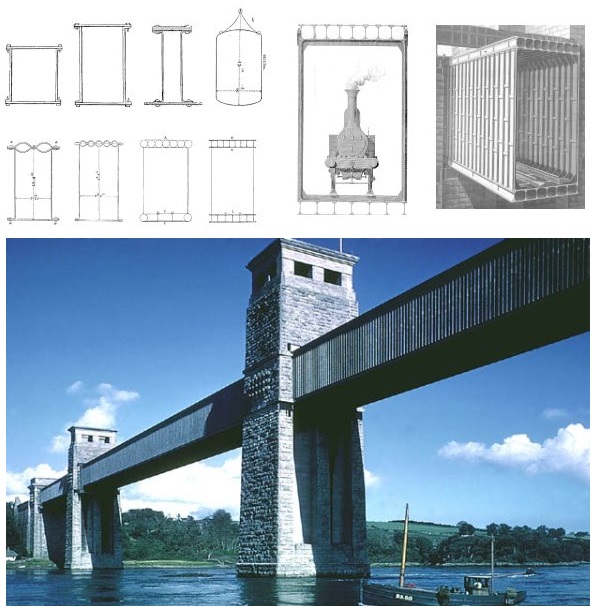 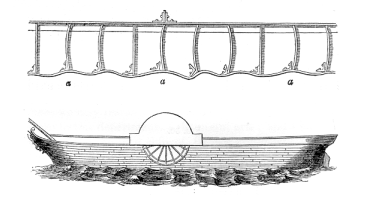 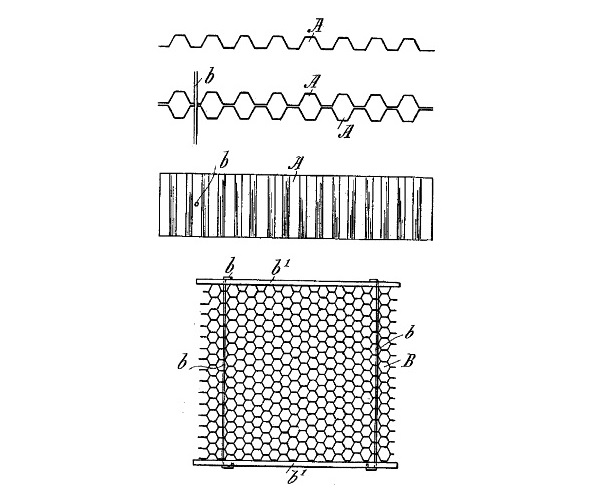 Chanute never patented but offered his findings to everybody, not because he did not see the value, but for higher values as he stated already in 1894: „Let us hope that the advent of a successful flying machine, now only dimly foreseen and nevertheless thought to be possible, will bring nothing but good into the world; that it shall abridge distance, make all parts of the globe accessible, bring men into closer relation with each other, advance civilization, and hasten the promised era in which there shall be nothing but peace and goodwill among all men.“ (Chanute, 1894) 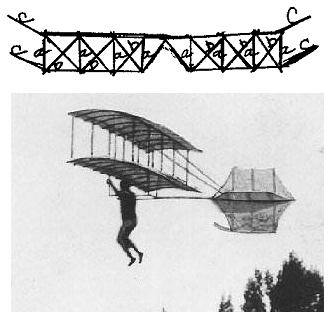 Several processes to produce a stack of expandable honeycombs from paper coils were patented by Heilbrun & Pinner in 1903 (and later by Budwig). 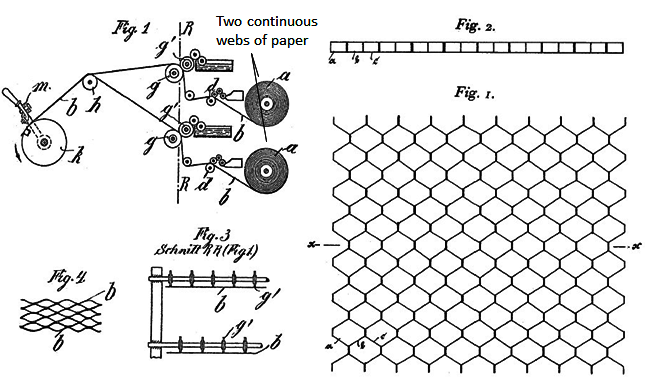 Chanute was mentor of the Wright brothers. The essential structure of their flyer from 1903 was a construction by Chanute. His understanding of lightweight design was the key for the first successful aircraft designs.

The honeycomb core was cut from a block of stacked and bonded corrugated board sheets and used for building applications. 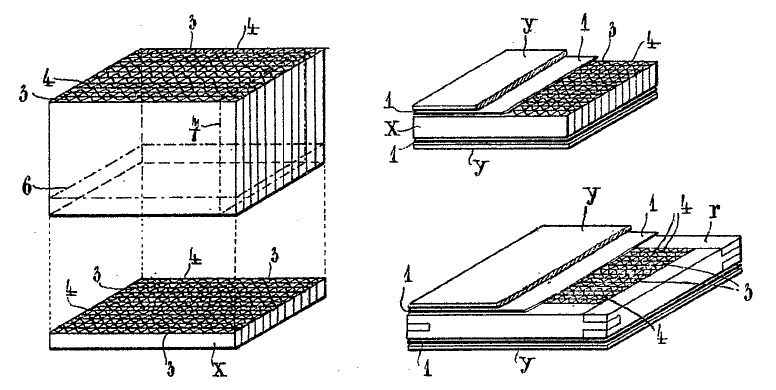 He reasoned that a metal sheet can also be loaded in compression if it is supported at very small intervals. The supports “may be produced by arranging side by side series of square or rectangular cells, triangular or hexagonal hollow bodies.” (Junkers, 1915)

However, the problem of bonding a continuous skin to cellular cores led Junkers to open corrugated structure, which could be riveted or welded together. 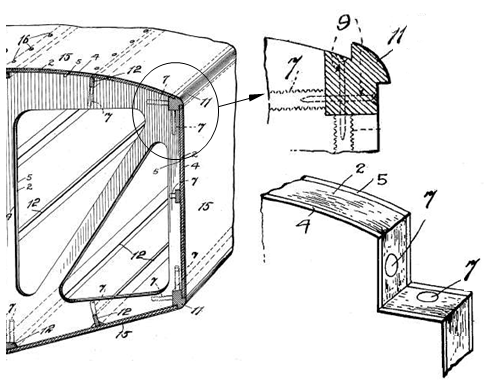 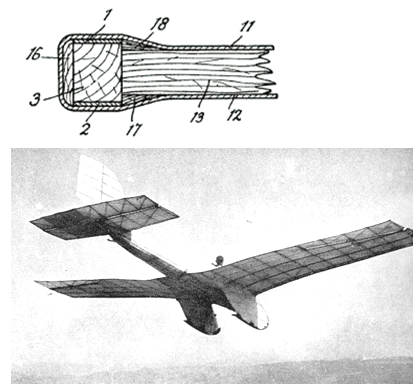 George Thomson proposes 1930 to use decorative expanded paper honeycombs (which were produced by the Heilburn & Pinner licensee Beistle) as a sound absorbing wall covering material.

Thomson patented 1931 the application of expanded paper honeycombs as a core material for lightweight plasterboard panels.

He worked together with John D. Lincoln who proposed in 1941 expanded honeycombs to the Company Glenn L. Martin for aircraft radomes with plywood skins, replacing a core from resin impregnated cotton waste. 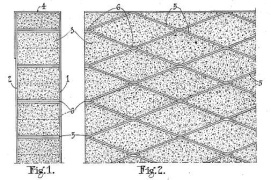 Edward G. Budd had in 1914 introduced the formed steel sheets for the first all-steel car and in the 1920´s his company became leading in automotive steel stamping. Budd designed and built in 1934 the record braking Zephyr train. 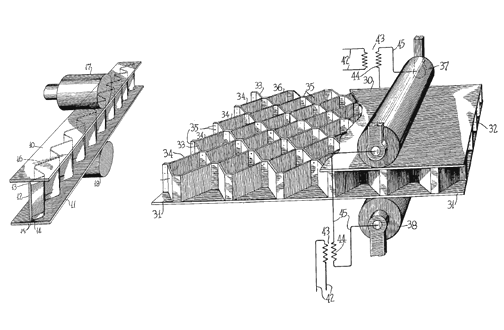 He proposed tubular and corrugated metal honeycombs for aircraft structures and a core-skin bonding method by rolling or pressing a skin which is in a plastic state onto the core cell walls which are not in a plastic condition but hard so that they are embedded into the skins. 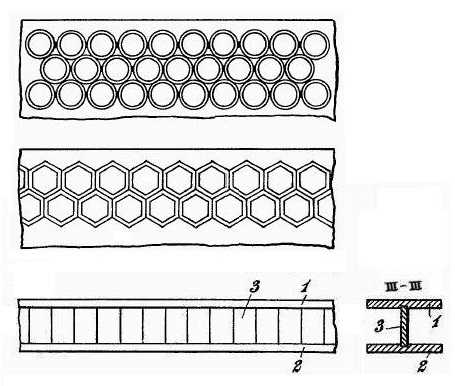 Norman A. de Bruyn patented in 1938 a manual production process for honeycombs from resin impregnated fabrics for aircraft sandwich constructions. 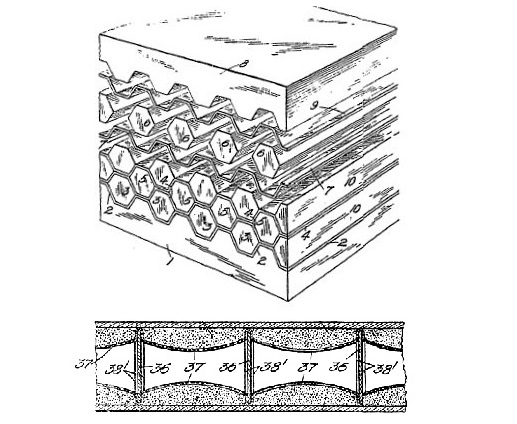 Roger C. Steele was inspired by the radome application. At his California Reinforced Plastics Company, which became few years later Hexcel, eaoneycombs were produced in license by a corrugation process (Engel, 1946).

Steele had the vision and conviction that “honeycomb was and is the most efficient structure that man will ever achieve.” 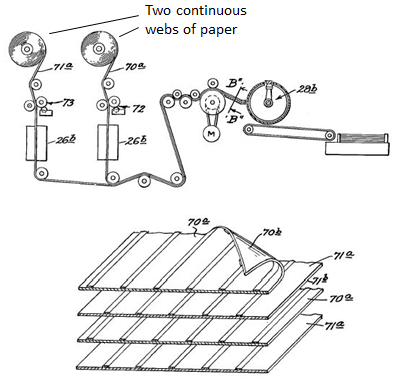 Nomex(R) paper honeycomb – Honeycombs from the fire-resistant non-woven aramid fibre paper Nomex(R), developed by DuPont mid 60’s were first extensive use in the Boeing 747 aircraft in 1969.

Extrusion of small honeycomb blocks, which are welded to bigger blocks prior cutting of the honeycomb sheet from those blocks.

Extrusion of single tubes. Bonding of the tubes to a large block and cutting to a honeycomb.

Tubular honeycombs had been developed further by Banks 1943 and Bacon 1945.

Development of the FoldHex honeycomb cores. 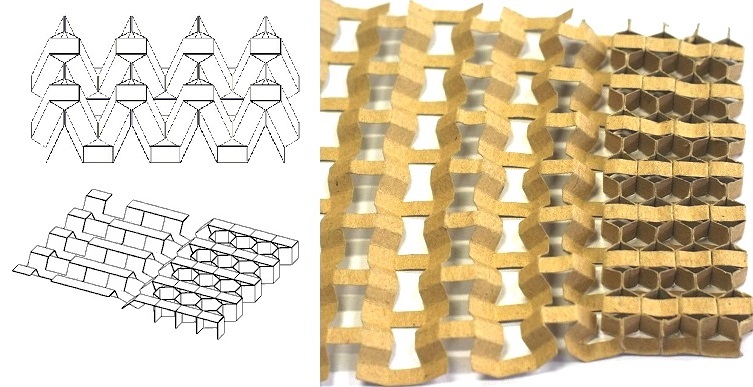 Development of the TorHex honeycomb cores.

Development of the ThermHex honeycomb cores.

Let’s build the future of honeycomb sandwich material together! 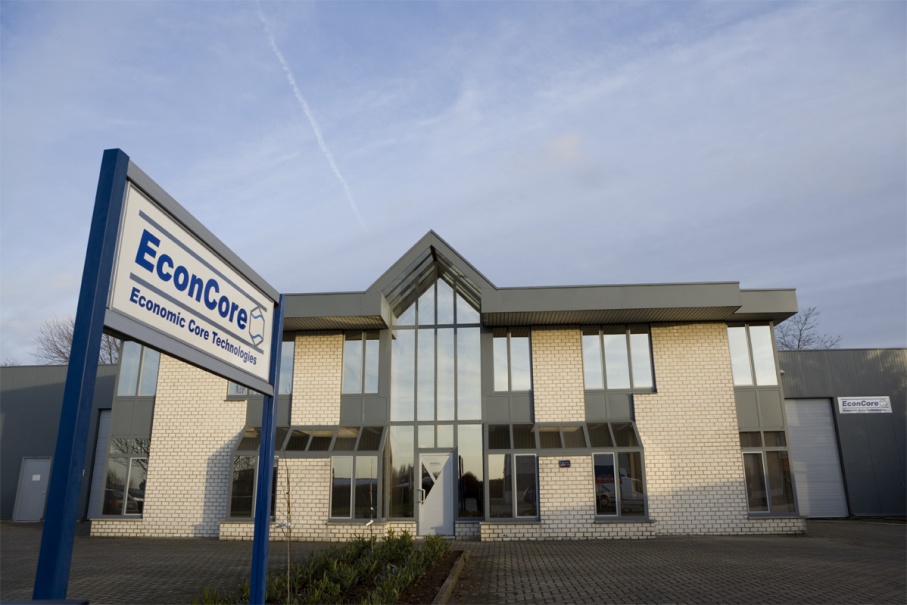